Save Temples from destruction

Posted on May 8, 2014 by ardhrafoundation 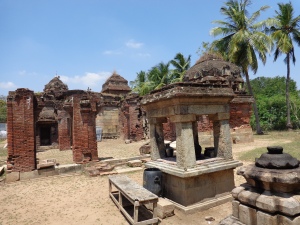 The Cauvery delta seems to have too many Temples in dilapidated state. The present condition is the outcome of  not less than a century year old neglect. The structures would not have suffered to this extent had the locals paid enough attention at appropriate time. It is quite common that the growth of plants take place more during the  monsoon. The newly formed plants, held between the stones and nourished by the monsoon are either not noticed or left unattended as there is no accountability for the maintenance of the structures. Even the presence of few service oriented guys in a village could have made the difference and saved them from destruction.

Removal of the “”python like “roots from the Vimanams, Gopurams and Mandapams has become a big challenge now. The thick roots can be removed only when the old structure is removed stone by stone. Reassembling these numbered stones is also a tough job which is normally carried out by using cranes. Thus it requires huge amount of money to do the entire job. That’s not enough. The gaps created by reassembling the stones must be plugged well to avoid the repetition of the old story.

There are many places where there are no signs of the old sannadhi built in the past. In such places, we need to build a new one as part of the Temple. But we can still save the existing sannadhis however bad the condition is. Temples constructed out of bricks and lime are the worst affected as the roots penetrate deeply and cause extensive damage.

As the situation demands immediate action, we appeal through these columns to act swiftly and save as many old Temples as we can. Though it is a welcome change that many people identify the Temples that are neglected and call for renovation, very few of them involve themselves to do the ground work. Those who are supposed to indulge more are interested in doing other activities that will fetch them money and fame.

When the Temple at Peravur was visited some two years back, the need for renovation was felt as the shine was facing a situation of now or never. The Ambal sannadhi had gone probably a century ago and the only sannadhi of Adhitheswara was under threat. The locals also shouldered the responsibilty and came forward to renovate the Vimanam of the Sanctum. We built a new sannadhi for Ambal and the consecration was held on 9th April,2014. The Temple now presents a new look but the old face was left untouched. Thevaram Hymns related to this place were inscribed on a Tablet and fixed at the mahamandapam.

Not far away from Peravur is a place called Karuppur where another dilapidated Temple was identified for immediate renovation. Among the idols, only the Linga Murthi is there. All other idols are lost and a heap of sand where the Ambal sannadhi was once present is no longer there! The Sanctum has a good vimanam over it but the walls that hold the vimanam are threatened by many trees which are deep rooted. So the entire structure is beyond repair. The walls made of bricks and lime are almost crumbled and wait for the inevitable to happen. Hence it has become necessary to rebuild the whole structure to house the moola moothi back. Bala sthapanam ceremony was held recently to pave way for the construction work. The Temple complex was levelled and the work will start on 13th April.

Another Temple at Enangudi near Nannilam was visited where the locals showed interest in retaining the Temple. Work on Swami Vimanam was in progress and all that they wanted was to speed up the work with external help. We assured all cooperation and the work on  vimanams of other sannadhis were started next week and we expect it to be over by next week. The consecration is planned for June 2014. The roof and outer walls are to be repaired before that and the villagers look for help from philanthropists.

As assured by us, a new sannadhi was constructed for Subamanya within a month at Korkai, near Kumbakonam. The locals are engaged in building a sannadhi for Vinayaka in the outer prakaram and the only work remaining would be the construction of a compound wall around the Temple complex.

The fact emains that even affordable people do not come forward to take up the Holy task of restoring our Heritage structures. Those who earn in lakhs and crores seldom think about this! Amazing wealth seems to be the way of life for them. Regardless of the amout of wealth we possess , it is commonly forgotton that the real master of all wealth on earth is The Almighty and we are blessed to enjoy whatever is given by Him. At the same time we should not forget to pay back to Him and the Society and the failure of which will lead us to Hell. This is how Saint Appar has warned us in his Hymn on Thiruvaiyaru:

This entry was posted in OTHER NEWS. Bookmark the permalink.